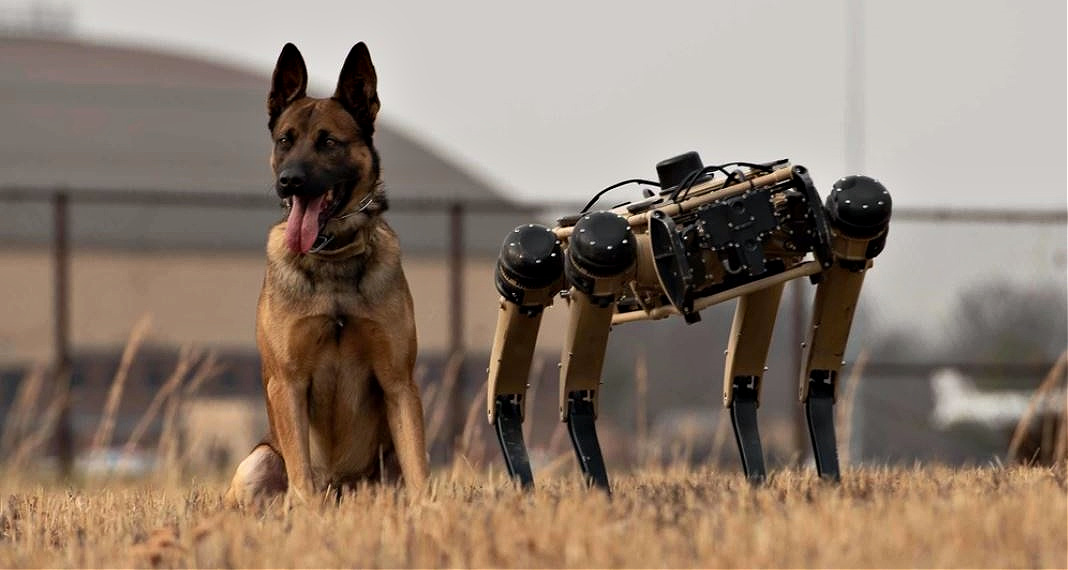 The Department of Homeland Security (DHS) recently announced that it has been developing and testing robot dogs for use by U.S. Customs and Border Patrol (CBP) at the U.S.-Mexico border. The robots are just one of several types of new surveillance technology CBP has implemented or tested. This technology raises privacy concerns for citizens and non-citizens alike, and risks increased fatalities for people trying to cross the border.

The new robots, made by Ghost Robotics, have four legs and can carry cameras and sensors across rugged terrain in remote areas of the U.S.-Mexico border. After the announcement, members of the public expressed concern. Some pointed to a demonstration in which a rifle was mounted to a Ghost Robotics robot at a 2021 military conference. The company has stated that it does not sell weaponized robots, but that it is up to the government what it does with the product once purchased. And some experts have expressed concern that once a type of technology has been accepted, new uses that violate civil liberties are likely to develop.

Even before this latest development, the Biden administration had implemented other new technologies at the border. For example, an upgraded X-ray technology derived from electricity instead of radioactive isotropes scans freight. And new Autonomous Surveillance Towers along the border have cameras that scan a 3-mile radius, can be relocated within two hours, and are fully solar powered.

This new border technology is consistent with President Biden’s immigration policy. During his campaign, he pledged to “[i]nvest in better technology coupled with privacy protections at the border, both at and between ports of entry, including cameras, sensors, large-scale x-ray machines, and fixed towers.” President Biden’s proposed U.S. Citizenship Act includes “the deployment of technology between ports of entry.” And the White House budget request for fiscal year 2022 includes $1.2 billion for border infrastructure, including “modern border security technology.”

Democrats have often proposed a “smart”, “virtual,” or “digital” border wall made of cameras, sensors, and radars. They have pitched this as a “humane alternative” to a physical barrier, the strategy pushed by President Trump.

But one study on sections of “virtual” wall in Arizona found “a meaningful and measurable shift in the location of human remains toward routes of travel outside the visual range of the [technology], routes that simultaneously required much greater physical exertion, thus increasing peoples’ vulnerability to injury, isolation, dehydration, hyperthermia and exhaustion.”

This outcome is consistent with those of past immigration strategies that relied on deterrence. Attempting to deter migration is ineffective and dangerous, as people still attempt to cross the border but in more remote areas. The remains of over 8,000 people have been found on the northern side of the U.S.-Mexico border since 1998—the real death toll is likely much higher.

CBP is also increasing the collection of biometric data at its land ports of entry. In October 2020, the agency launched CBP One, an app that uses GPS tracking and facial recognition to facilitate inspection and entry into the United States. The app raises several concerns, including ones related to privacy and facial recognition technology’s higher false positive rates among certain racial groups.

Surveillance and militarization also harm border communities. One community that has suffered greatly is the indigenous Tohono O’odham Nation. CBP has installed vehicle barriers, interior checkpoints, and Integrated Fixed Towers on Tohono O’odham land, which is divided by the U.S-Mexico border. People living in these areas report a constant buzzing, the feeling of always being watched, and symptoms of “checkpoint trauma.”

But border surveillance technology doesn’t only affect immigrants and border communities. Technologies that start at the border, such as aerial drones and license place scanners, are often later used in the interior of the country. In 2020, CBP agents and drones were deployed to protests in various cities of the police murder of George Floyd, a Black man in Minneapolis.

And the militarization of the border wastes immense amounts of taxpayer dollars for the benefit of for-profit defense contractors. In 2006, Boeing Defense started work on a DHS contract to build the Secure Border Initiate Network, a type of “virtual” wall. Five years later, a review showed that the project could not meet its objective. DHS then canceled the contract. $1 billion dollars had already been spent, at a cost of at least $15 million per completed mile.

Increasing border surveillance technology is harmful, ineffective, and unnecessary. The Biden administration should focus on restoring access to asylum and creating a humane immigration system. There’s no need to waste resources on a modern version of the repeatedly failed deterrence strategy.