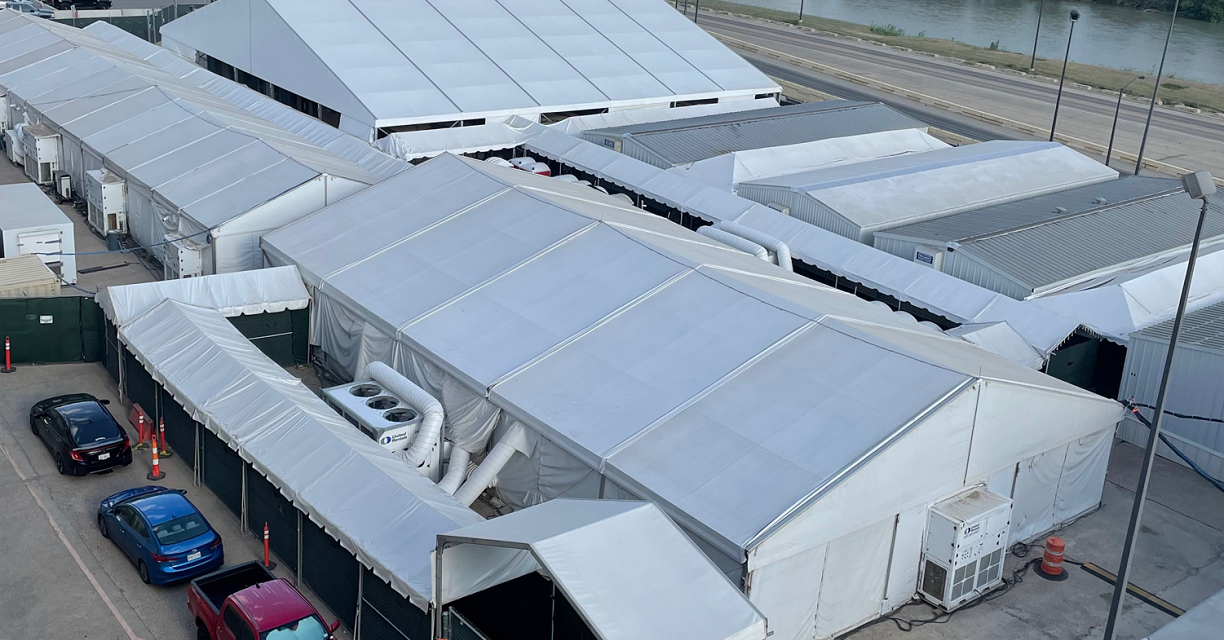 More than two years after visiting the Trump administration’s “Migrant Protection Protocols” (MPP) tent courts in Laredo, Texas, I returned to see how they had changed under the Biden administration. While some changes have been made, they haven’t resolved the program’s biggest flaws, such as the danger asylum seekers face in Mexico, low rates of legal representation, and barriers to adequately preparing a case. There is no way to reform MPP—the only way to end these violations of due process and human rights is to end the program.

Under MPP, asylum seekers are returned to Mexico during their immigration proceedings, coming to the border for each hearing. In Brownsville and Laredo, Texas, temporary facilities were built for the hearings—large tents over a complex of shipping containers and trailers. MPP hearings also take place in El Paso, Texas and San Diego, California, but those asylum seekers go to hearings at the regular immigration court.

First, the U.S. government cannot get around the fact that asylum seekers are in extreme danger in Mexican border cities. Human Rights First has documented nearly 10,000 instances of kidnapping, rape, and other assault against migrants in Mexico under the Biden administration. Nuevo Laredo, the Mexican city across the Rio Grande from Laredo, has particularly high rates of violence. For this reason, people enrolled in MPP there have been transported about 125 miles south to Monterey while they await their next hearing. But Monterey is also experiencing extremely high levels of violence. In response, new enrollments into MPP in Laredo have been paused, but those already enrolled continue to have to live in the region and travel through it to attend hearings.

Unlike the Trump administration, the Biden administration is coordinating with the government of Mexico to provide transportation and shelter stays for those enrolled in MPP. But this isn’t sufficient to protect them from violence, and harsh conditions in shelters have been reported.  I attended the hearing of four women who all stated that they were living in a shelter but were still afraid to return to Mexico.

The Biden administration has exempted three groups of people from MPP due to their particular vulnerabilities: people with a mental or physical health issue or disability; people of advanced age; and people at increased risk of harm in Mexico due their sexual orientation or gender identity.  Significantly more people are being exempted now than under the Trump administration. But one of the women in the hearing I observed was in a wheelchair, demonstrating that some people with disabilities are still being returned to Mexico. And the truth is that all asylum seekers are vulnerable to harm in Mexico.

Another huge problem with MPP has been that the need for legal representation far exceeds the number of attorneys taking the cases. The program concentrates cases that would otherwise be spread around the country into four border cities, which have relatively few attorneys. Some attorneys report that they are hesitant to take these cases because they take the time of multiple non-MPP cases. Others are unwilling to be complicit in a program that so unfairly stacks the odds against asylum seekers.

Because of this, at least 92.5% of people subjected to MPP under the Trump administration did not have legal representation. And out of 59 people I learned of during my recent visit to Laredo, only six seemed to have attorneys.

Removal proceedings are extremely complicated, and it is nearly impossible to navigate them successfully without an attorney. During the recent hearing I observed, the judge told the women that they would need to file a change of address form if they moved from their current shelter, then immediately admitted that it would be difficult to find someone in Mexico who could help them fill out the form in English as required. Even this relatively simple step in the process becomes logistically complicated under MPP.

The few people in MPP who have attorneys often don’t have the resources to communicate with them enough to effectively prepare their cases. The Biden administration promised to improve legal access to those in MPP. But attorneys still report communication difficulties while their clients are in DHS (Department of Homeland Security) custody, such as clients being unable to call at a scheduled time, or a government attorney entering the room during a confidential legal call. And when their clients return to Mexico, they have even more trouble making confidential calls or exchanging documents.

Finally, even though the initial group hearings that I went to observe are legally required to be open to the public, I faced barriers to observing them all three times that I visited under the Trump administration, in both Brownsville and Laredo.

On my recent visit to Laredo, those challenges continued. There is no information posted publicly about how to enter the tent courts. No one came to let me in at the entrance I had used in the past, so I had to try four other locations before finally gaining access, at which point the hearing was over. At one location, a U.S. Customs and Border Protection officer told me that the hearings were not open to the public and that I would have to request permission from “headquarters,” but that he could not provide any specific contact information for me to do so.

There is no way to implement MPP without due process and human rights abuses. The program must be ended immediately. But expelling an asylum seeker under Title 42 or sending them to detention presents many similar problems. All of these are deterrence strategies that only push people to cross the border through more remote and dangerous terrain.

DHS must create an orderly, dignified, and humane process to access asylum.  It should reopen the ports of entry, which have been almost entirely closed to asylum seekers during the COVID-19 pandemic, and work with community-based organizations on both sides of the border to encourage people to present themselves there. DHS should then prioritize processing of these asylum seekers, many of whom have now been waiting years to enter the United States. The agencies should extensively coordinate with Mexican and U.S. border NGOs and build trust with allies, ensuring that those who are admitted are paroled in or supported with proven protection-centered alternatives to detention rather than being sent to detention. Only then can they be safe, access legal services, and properly prepare their cases.