Why Cutting Immigrant Integration Programs Hurts All of Us 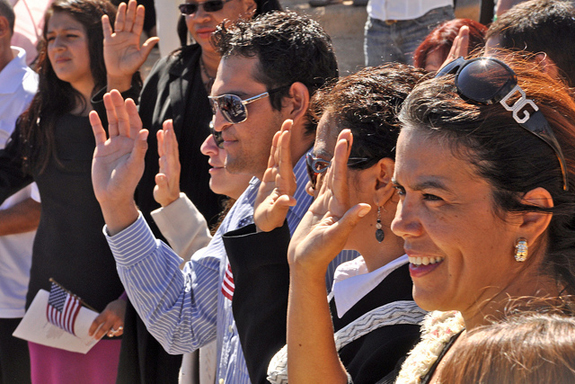 Among the many spending cuts recently passed by the House was funding for the Office of Citizenship’s immigrant integration programs. The importance of these programs, however, cannot be overstated. Immigrants who integrate into U.S. society go on to become innovators, entrepreneurs and future job-creators. Although a new study released today by the British Council, Migration Policy Group and Immigration Policy Center ranks the U.S. nine among 31 countries in promoting full integration of legal residents (a relatively good score), cutting these programs can only hurt us in the long run. As the Senate prepares to take up the Continuing Resolution, restoring $11 million to the budget of the Office of Citizenship should be a no brainer given that this relatively small investment in the potential of aspiring Americans can pay huge dividends for the United States.

The Migration Integration Policy Index III (MIPEX) places the U.S. in the top 10, (Sweden, Portugal, and Canada take the top three spots overall) largely because of our outstanding performance in one of the seven categories surveyed: civil rights and anti-discrimination laws (we’re number one there, tied with Canada) compared to other countries. MIPEX also finds that the U.S. does a decent job of promoting access to nationality (8th in that category), largely through laws that grant citizenship at birth, reasonable standards for becoming a citizen, and some commitment to helping newcomers prepare for citizenship.

But many of these citizenship programs are at risk during these times of belt-tightening at the state and federal level. As states prepare to slash their budgets in this area (Illinois, a leader in immigrant integration, is reportedly cutting funding for immigrant services by 74% over two years), it becomes even more imperative for the federal government to provide support. Giving the seed money for integration grants that will fund programs to help teach English and civics courses and prepare legal residents to take the citizenship exam is critical to ensuring that legal permanent residents fully integrate into society through citizenship.

Why? Immigrants are increasingly showing themselves to be entrepreneurs and innovators who help to revitalize communities. Whether they come on family or employment visas, through the asylum or refugee program, or through other much smaller legal immigration programs, legal permanent residents come to this country with the dream of becoming U.S. citizens and giving back to their adopted home.

The MIPEX survey demonstrates that the U.S. can certainly improve in plenty of areas—family reunification, employment access, the many obstacles to maintaining legal status, and especially the high fees we charge for immigration benefits—but ninth place is not a bad starting point.

The Office of Citizenship has already helped thousands more people prepare to become citizens through Congress’s support and it has helped to reinforce the network of excellent state service providers around the country. Cutting the funding for integration grants now, just when the program is starting to show some benefits is a setback for immigrant integration. More importantly, it would be a huge loss of human potential, something the U.S. cannot afford to waste.