What’s the Value of Keeping Undocumented Youth in the Shadows? 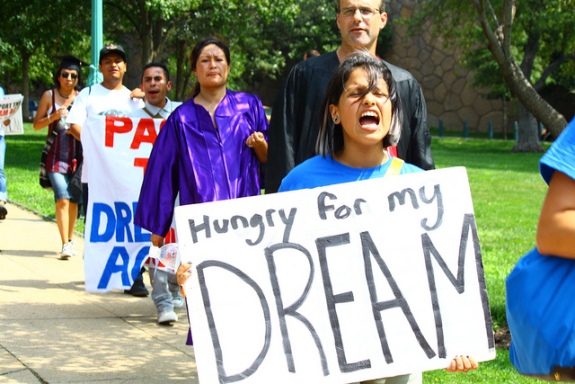 The real life psychological ramifications of young immigrants struggling with their unauthorized status are often glossed over in the larger immigration debate. In a recent journal article, Learning to Be Illegal: Undocumented Youth and Shifting Legal Contexts in the Transition to Adulthood, University of Chicago professor Roberto G. Gonzales uses 150 interviews with young Latino adults to examine how unauthorized youth deal with their legal status as they come of age. Gonzales finds that as unauthorized immigrant children transition into adulthood, many “learn to be illegal,” figuring out how to exist in a society that was once welcoming, but now prohibits their participation.

Under U.S. law, all children have the legal right to a K-12 education, regardless of their immigration status. After graduation, however, unauthorized youth quickly learn that they cannot legally work, vote, receive financial aid for college or drive in most states. In addition, they have the added fear of deportation. Throughout his research, Gonzales found that unauthorized youth “uniformly noted a jolting shift at around age 16, when they attempted to move through rites of passage associated with their age…as respondents tried to take these steps into adult life, they were blocked by their lack of a Social Security number.” One student noted:

I never actually felt like I wasn’t born here. Because when I came I was like 10 and a half. I went to school. I learned the language. I first felt like I was really out of place when I tried to get a job. I didn’t have a Social Security number. Well, I didn’t even know what it meant. You know Social Security, legal, illegal. I didn’t even know what that was.

Gonzales found that nearly 60 percent of the unauthorized youth interviewed discovered they were unauthorized when applying for college. Most of those who did not attend college discovered their immigration status when attempting to work. Sadly, the end result for both groups was universal disappointment—their chances of finding a good job or attending an esteemed university severely diminished by their immigration status as were their chances of contributing to society.

These youth, however, have not given up on pursuing their educational aspirations. Many are working on the passage of federal legislation known as the DREAM Act, legislation which would solve many of the issues facing these youngsters. The DREAM act would allow unauthorized youth to eventually gain citizenship by going to college or joining the military after high school. While passage of the DREAM Act is currently an unlikely political reality, the Obama Administration has the ability defer the deportations of certain unauthorized youth who would likely have qualified for the DREAM Act.

So what can we do about America’s unauthorized youth? While Congress remains gridlocked on legislation that would enable unauthorized youth to fully participate in society, Gonazles asks the larger question—what is lost when we keep unauthorized youth—many of whom will remain in the U.S., regardless of their status—in the shadows?

Whether they become a disenfranchised underclass or contributing members to our society, their fate rests largely in the hands of the state.

We must ask ourselves if it is good for the health and wealth of this country to keep such a large number of U.S.-raised young adults in the shadows. We must ask what is lost when they learn to be illegal.

Sadly, the answer to that question is “too much.” While Congress continues to play politics with reform efforts, America loses out on the raw potential these unauthorized youth bring to the table.