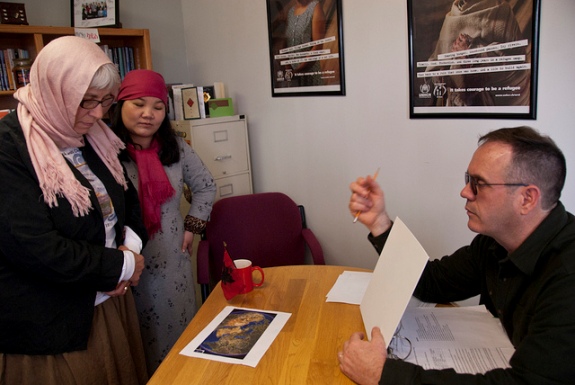 On August 2, after a number of press conferences and late-night negotiation sessions, President Obama signed into law the Budget Control of Act of 2011, legislation that prevented the U.S. government from defaulting on its debt and requires deep cuts into future federal spending. While deficit cutting laws may not sound very interesting to the average reader, this new law will decrease the size and role of the federal government over the next decade. Over the next four months, Congress will have to make decisions that will shape the government’s capacity to provide protection and life-saving assistance to refugees, adjudicate immigration benefits, and enforce U.S. immigration laws along the border and in the interior (apprehensions, detentions, deportations).

Depending on what is cut, there could be a huge impact on the budgets of the immigration agencies within the Department of Homeland Security, which, in turn, would have a huge impact on immigrant and refugee communities.

The Budget Control Act mandates $917 billion in cuts over the next ten years by implementing spending caps on discretionary federal spending. (Note: Federal entitlement programs are exempt from these spending caps.) The bill also places an additional cap on “security” spending for the next two years, forcing Congress to divide up an estimated $5 billion in cuts among the Departments of Homeland Security, State, Defense, Veterans Affairs, and a couple of smaller federal agencies.

The law also creates a Congressional Joint Select Committee, commonly referred to as the Super Committee, a bipartisan working group of 12 members of Congress to recommend at least $1.2 trillion in additional spending cuts that need to be generated by 2021. The law requires Super Committee approval by November 23, 2011, a Congressional vote by December 23, 2011, and enactment into law by January 15, 2012.

If the Super Committee fails to agree on legislation or if Congress fails to pass the Committee’s recommendations that meet the law’s specifications, Congress must apply across-the-board cuts. This means that if Congress fails to pass a bill that reduces spending by at least $1.2 trillion, cuts would be phased in annually through 2021 to cut a total of $600 billion from the Department of Defense and a total of $600 billion among the other federal agencies.

When Congress returns to Washington next week, members will need to immediately find a way to comply with the new discretionary spending caps and work towards a grand compromise to meet the $1.2 trillion targets. At least theoretically, everything is on the table for cuts, including funding for refugee assistance, naturalization support, integration services, border enforcement, detention, and immigration courts.

It’s too soon to know how Congress will make these new spending cuts and what impact they will have on immigration and refugee programs. However, it is clear that Congress has an opportunity to make smart choices about how to allocate its limited resources. Let’s hope they protect the essential services and programs that provide support and relief to immigrants, refugees and their communities.

*Eric B. Sigmon is the Director for Advocacy at Lutheran Immigration and Refugee Service, a national organization recognized for its advocacy leadership and for providing services to refugees and migrants through over 60 grassroots legal and social service partners across the United States.