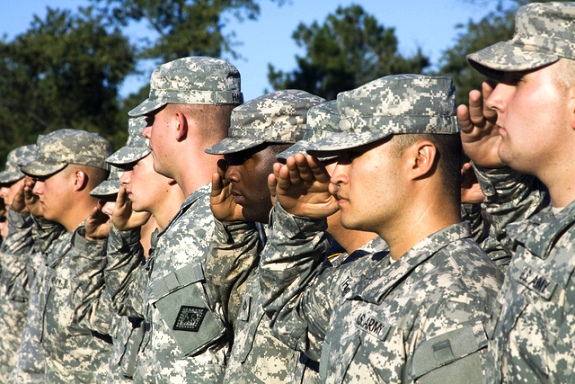 This Veterans Day, we celebrate those who have proudly served in the U.S. military, including immigrants.  Immigrants have long served in all branches of the U.S. military as infantry soldiers, medics, foreign-language translators, and in every other job open to them. At last count, foreign-born service members made up about 8% of the 1.4 million military personnel on active duty. However, some highly qualified non-citizens have been blocked from serving due to the Obama Administration’s suspension of a recruiting program called the Military Accessions Vital to the National Interest (MAVNI). Frustrated by the government bureaucracy responsible for halting MAVNI, those non-citizen volunteers are petitioning the government in hopes of reopening the program.

Started under the Bush Administration in 2008, MAVNI was a highly successful military recruiting program open to certain legal aliens who were also U.S. licensed medical professionals or who spoke certain strategic languages.  Applicants were required to pass special immigration and security screening before being approved for enlistment and were put on an accelerated path to U.S. citizenship.  If they failed to serve honorably for five years, they could lose their U.S. citizenship.

Although MAVNI was highly successful and saved the Pentagon hundreds of thousands of dollars, the program came to an end in 2010 when newly confirmed Obama Administration political appointees failed to extend it, even though MAVNI was scheduled to continue for several more years. Many blame government inefficiencies at the Office of the Undersecretary of Defense for Personnel and Readiness at the Department of Defense, which is primarily responsibility for the program and has reportedly experienced turbulence in the last year.

In the meantime, hundreds of frustrated MAVNI applicants began a White House petition, asking family members, friends, and colleagues for their signatures in a quest to get the attention of the Obama Administration and get the MAVNI program re-opened. Under White House petition rules, the MAVNI applicants need 25,000 signatures on their petition to earn a response. At this point, they have about 700.

Unlike many White House petitions that ask for legal changes or budget appropriations, the MAVNI petition does not seek Congressional legislation or taxpayer money.  Leon Panetta, the Secretary of Defense, can put the program back into operation immediately by signing a memo. One would hope that the White House petition process might get Secretary Panetta’s attention, as MAVNI applicants report that letters and Congressional inquiries have not yet resulted in any action.

There is no question that MAVNI is critical in filling military shortages of medical professionals and foreign language speakers. In fact, senior military leaders testified repeatedly before Congress about the value of the program. MAVNI recruits many highly educated people who would not normally find an easy path to serving America due to America’s dysfunctional legal immigration system.

This Veterans Day, let’s hope the administration recognizes the vital role immigrants have and continue to play in the U.S. military and makes a greater effort to reopen the MAVNI program.