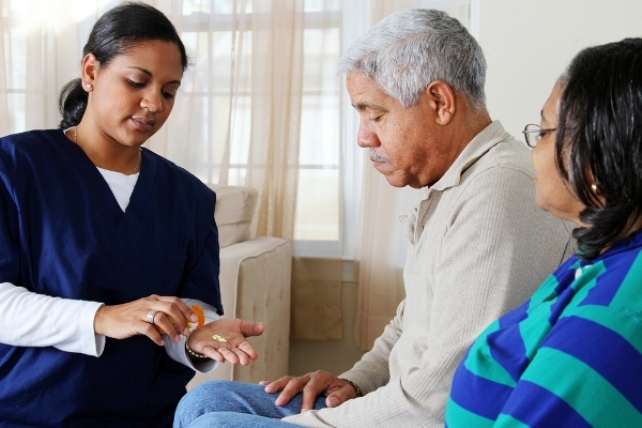 In 91-year-old Elda Frank’s apartment is a scenario that plays out every moment of every day. An immigrant caregiver with no paid sick days scrambles for backup when she becomes ill on the job.  In caregiver Paula Osorio’s case, she called Frank’s son, Bruce, and offered to send her partner, Roberto, in her place.

“I think it’s fine because Roberto is very nice to my mom, too,” said Bruce Frank, a father of three and computer engineer in Foster City. “I told Paula ‘to take the time that you need’, that if she can’t make it, I can find someone or go myself.”

But Frank concedes that the idea of Osorio becoming ill and missing work always weighs on his mind.  “Of course, we always worry,” he said. “If she doesn’t come in, who’s going to take care of my mom? In my mom’s case, she has me. But there are people who don’t have anybody.”

America is suffering from a shortage of caregivers. And of the existing caregivers, a whopping 62 percent lack a single paid sick day, according to the Institute for Women’s Policy Research. Besides the emotional and physical costs to caregivers’ families, the lack of a national paid sick days policy has been costly to all U.S. workers and the economy.

For immigrant caregivers who choose to take unpaid time off, it isn’t uncommon for them to pay for a replacement so that they have a job to go to following an illness.

“I knew a caregiver who needed a hysterectomy,” said Myrla Baldonado, a Filipina caregiver in the Chicago area. “She had to find and pay someone else out of her own pocket so that she could still have a job when she got out of the hospital….This situation of paying somebody to fill in especially when somebody is sick happens all the time. Caregivers keep it a secret that they are going for medical consultations or procedures that might make it appear that they have a serious illness which might cause them to lose their jobs.”

As for the workers who choose to go to work anyway to avoid missing a much-needed paycheck, they face the likelihood of infecting co-workers or getting injured on the job due to fatigue. Researchers list the price tag for “presenteeism” – or workers who go to work sick – at $160 billion a year.

Considering that most seniors in the United States are covered by public insurance programs like Medicare and Medicaid, the taxpayer should feel leery.

For Osorio, who has worked with Frank for the last five years and even visits her on her evenings off, the lack of paid sick days is troubling in another more profound way. “If something happens to me, who will take care of her?” Osorio wonders aloud.