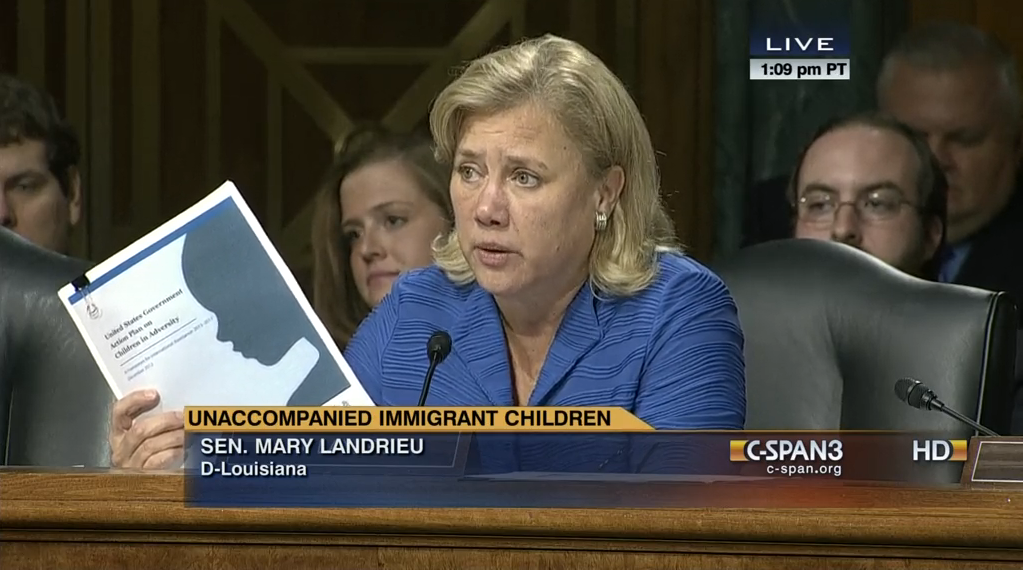 On Thursday, the Senate Appropriations Committee held a hearing on the Administration’s emergency request for $3.7 billion to address the humanitarian situation as children and families flee violence in Central America. While the committee nominally addressed only the funding request, the president’s stated intention to ask for more “discretion in processing” children also was a topic for debate.

Homeland Security Secretary Jeh Johnson said that Border Patrol could pick up as many as 90,000 unaccompanied children by September, the end of this fiscal year —more than a three-fold increase over last year. Johnson also told senators that immigration enforcement agencies would run out of money in August without action. The administration proposed $1.8 billion to Health and Human Services (HHS) for care and custody of children, and $1.5 billion for immigration enforcement agencies, including new family detention centers. However, the request only includes to $300 million to the State Department to address root causes in Central America and $64 million to the Justice Department for judges and courts ($45.4 million), lawyers ($15 million), and legal orientations ($2.5 million). All told, the White House proposed 100 times more money for enforcement than lawyers for children—an enforcement-focused solution to a humanitarian problem.

During the hearing, Johnson said that to deter children from arriving, “[p]eople in Central America need to see illegal migrants coming back,” so that “that they wasted their money.” Not every senator agreed. Sen. Tom Harkin (D-IA) said, “We can’t hold ourselves up…as some [paragon] of human rights protection in the United States and then say ‘Round ‘em up and ship ‘em back.’” Sen. Richard Durbin (D-IL) asked, “What are we returning them to? Honduras, the murder capital of the world?” The murder rate in Honduras, El Salvador, and Guatemala, for example, outpaces that of war-torn Congo. And as Elizabeth Kennedy explains in a report for the American Immigration Council report, Salvadoran children who are returned after trying to reach the U.S. border primarily cited violence, gang threats, or crime as their reason for leaving.

Against this backdrop of the violence children are facing in their home countries, debate about the 2008 Trafficking Victims Protection Reauthorization Act (TVPRA) assumed center stage at the Senate hearing. The law provides key protections for children arriving alone from countries that are not contiguous with the U.S. while an immigration court reviews whether the child would be deported to danger or death. The administration wants to change the act so that armed Border Patrol agents, not HHS, quickly screen children for trafficking before Border Patrol gives them an “option” to return. During the appropriations hearing, Sen. Dianne Feinstein (D-CA), one of the TVPRA’s primary authors, defended its protections for children. She told how she saw a 15-year-old Chinese girl, a survivor on a container ship whose parents had died, shackled before an immigration judge with neither interpreter nor lawyer after being detained for eight months. Instead of altering the protections, she urged the Department of Homeland Security (DHS) and HHS to find “exceptional circumstances” under a section of TVPRA if DHS and HHS logistically could not meet their obligations. “I hope the bill does not need amending,” Feinstein said.

Other Senators were more blunt. “There’s danger in flexibility,” Harkin said. “That’s why we have laws.” And Sen. Patrick Leahy (D-VT) said children should “tell their story to a judge. That’s how we identify victims of persecution.” (This week, the Council and others filed suit to provide unaccompanied children with lawyers to let them tell those stories.) And Durbin told Johnson, “I think you’re a good person…and I know you’re a good lawyer. But when you ask for more discretion to deport, I think of these children.”

The humanitarian solution to the problem, it appears, was passed in 2008. Tomorrow’s question is whether Congress will take it away.