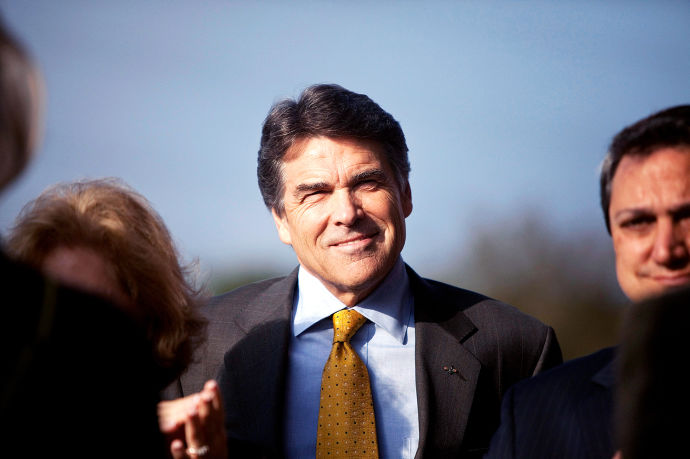 After more than a century’s worth of studies and reports, you’d think that politicians would have gotten the message: not only are the vast majority of immigrants not criminals, but immigrants are less likely to be criminals than native-born Americans. This is true for both unauthorized immigrants and those who are legally present in the country, and it is true for immigrants from Mexico and the nations of Central America. It would seem that Gov. Rick Perry (R-TX) is not familiar with this body of evidence.

Speaking on CNN, Perry directed his ire at “the 80-percent-plus individuals who don’t get talked about enough who are coming into the United States illegally and committing substantial crimes.” According to Perry, “since September 2008…203,000 illegal immigrants have been booked into Texas county jails” and “these individuals are responsible for over 3,000 homicides and almost 8,000 sexual assaults.” The anchor of the show upon which Perry was speaking pushed back against these fanciful numbers, pointing out that “a number of fact-checkers have said that that 3,000-homicide figure is wildly off.” Perry quickly shifted to a fact-free approach to the issue, asking rhetorically what number of homicides committed by unauthorized immigrants would be “acceptable.” In other words, ideology—not evidence—matters more.

However, facts should matter in a question of public policy involving the governor of the second most populous state in the nation. Consider that Perry has ordered the Texas National Guard to the border at a cost of more than $12 million per day. The rationale he offered for this decision was a confused mix of references to Mexican drug cartels, unauthorized immigrants, and unaccompanied children from Central America. Perry seemed to assume that immigrants and criminality go together—no evidence required.

Real evidence, though, tells a different story. For instance, a comprehensive 2005 study released by the Federal Reserve Bank of Chicago used data from the 1980, 1990, and 2000 Censuses to demonstrate not only that immigrants have had lower incarceration rates than the native-born for quite some time, but that this effect has been growing more pronounced with each passing decade. The study goes on to answer the question of whether or not these decreasing incarceration rates are the result of harsh immigration policies enacted in the 1990s, either because more immigrants were deported or because more were deterred from criminal behavior because of the threat of deportation. The authors find that the “evidence suggests that deportation and deterrence of immigrants’ crime commission from the threat of deportation are not driving the results. Rather, immigrants appear to be self-selected to have low criminal propensities and this has increased over time.”

More recently, a 2013 study went beyond how likely people are to get locked up and focused on criminal behavior itself. The study sought to determine how often native-born Americans and immigrants engage in a wide range of violent and nonviolent “antisocial behaviors,” ranging from hurting another person on purpose and using a weapon during a fight to shoplifting and habitually lying. The research found that “immigrants to the US are less likely to engage in violent or nonviolent antisocial behaviors than native-born Americans. Notably, native-born Americans were approximately four times more likely to report violent behavior than Asian and African immigrants and three times more likely than immigrants from Latin America.”

Perry’s pronouncements notwithstanding, the truth is that crime in the United States is not caused or even aggravated by immigrants, regardless of their legal status. This is hardly surprising since immigrants come to the United States to pursue economic and educational opportunities not available in their home countries and to build better lives for themselves and their families. As a result, they have little to gain and much to lose by breaking the law. Unauthorized immigrants in particular have even more reason to not run afoul of the law given the risk of deportation that their lack of legal status entails. Public policies must be based on facts, not anecdotes or emotions. And the fact is that the vast majority of immigrants are not criminals.