Children in Jail: What It’s Like for Immigrants Held at Artesia Center 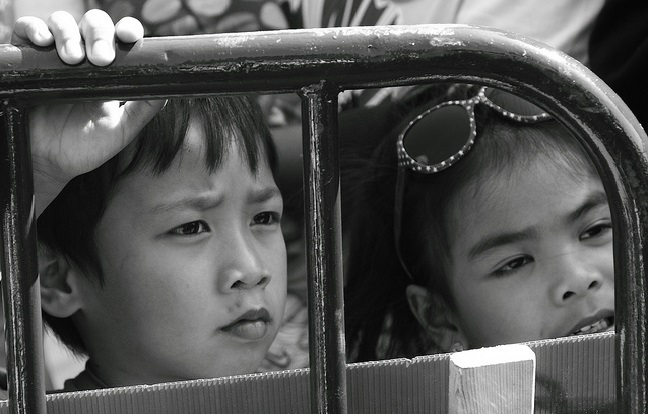 The rule of law is only a mirage in the remote, dusty town of Artesia, New Mexico, where the Department of Homeland Security (DHS) is holding more than 600 Honduran, Salvadoran, and Guatemalan women and children. The children in the 278 families range from babies to teenagers. Virtually overnight, DHS turned part of the Federal Law Enforcement Training Center (FLETC) into an immigration jail to house the families crossing the U.S. border from Central America.

New Mexico Immigrant Law Center staff was able to view the Artesia facility and talk to women and children during a recent tour for non-governmental organizations and in subsequent individual interviews.  We were shocked by what we’ve learned.

We talked to women as they held babies in their arms or as their children listened and played nearby. These same women go to their credible fear interviews with their children in tow. Traumatized children, especially after a harrowing journey from Central America, should never have to hear their mother’s reports of the violence that caused them to flee.

Mothers report their children are not getting adequate medical attention or any mental health services for the trauma they experienced at home, in their trips and in the FLETC jail. And they fear being denied access to the few floating cell phones in the jail if their children misbehave.

DHS euphemistically calls these women and children “residents,” but make no mistake, FLETC is a jail. DHS has short-circuited the asylum process, promising quick deportations to send a message to other Central American asylum seekers not to come.

Artesia is 240 miles from Albuquerque, where our office is, and 200 miles from El Paso, Texas. Judges in Arlington, Virginia—1,800 miles away—hold court hearings via videoconference for the families in the Artesia facility.

ICE has provided minimal confidential space for attorneys to meet with potential clients. Officers walked in between the flimsy cubicles where we talked to women and their children, and they used a fax machine a few feet away. Women get little or no notice of when a credible fear interview will be held, sometimes having to go alone even when they have a lawyer. Officials have told them they will be deported, whether they have a lawyer or not. Though asylum claims may be based on government persecution, a Honduran consular official was given open access to FLETC and has told women they will be quickly deported.

Deportations of the women and children before lawyers could begin to provide presentations for them about their rights. The American Immigration Lawyers Association, Diocesan Migrant and Refugee Services, and other NGOs and private attorneys from New Mexico and far away states are making a valiant attempt to provide know your rights presentations and pro bono representation to the detainees. But it’s an unfair fight when DHS’s clearly announced goal is accelerated proceedings and quick deportations.

ICE—making an all-purpose “national security argument”—has set a policy of no bond or high bond for those who pass a credible fear interview, even if they present no flight risk or risk to public safety. As a result, the women and children face little possibility of release during the whole asylum process. The government cites a reprehensible post-9/11 ruling by Attorney General John Ashcroft that used wholesale and exaggerated national security claims to justify denying bonds to Haitians who arrived by boat as its justification for this policy.

Federal officials argue in affidavits submitted in opposition to bond requests that “[d]etention is especially crucial in instances of mass migration,” claiming that “the likelihood of low or no bond” is one of the reasons the women and children fled to the U.S. But that disingenuous argument ignores the conditions of violence and fear that spurred the flight from Central America.

Jailing babies on the basis of national security is shameful. The women and children at FLETC should be released and given a fair chance to present their asylum cases.