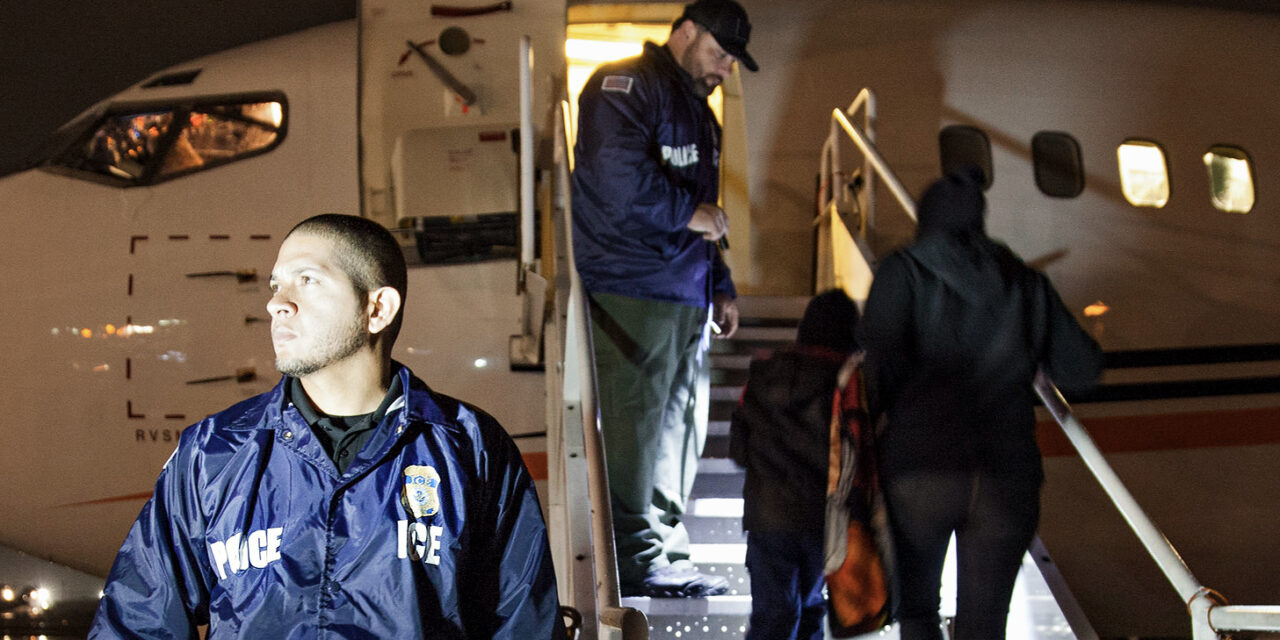 U.S. Immigration and Customs Enforcement (ICE) deported a flight of approximately 100 African asylum seekers to their home countries, where they could face immediate arrest and death.

Many of the Cameroonian and Congolese immigrants had protested their detention and spoken out about abuses in U.S. custody. ICE went forward with the deportations on October 13 even after members of Congress attempted to intervene.

Detention can be horrific for anyone in ICE custody, but detained African immigrants must also contend with anti-Black racism. Black immigrants are at higher risk of solitary confinement, higher bond amounts to secure their release, prolonged detention, and deportation on criminal grounds.

Since February, approximately 40 Cameroonians detained at ICE’s Pine Prairie facility in Louisiana have organized on-and-off protests of their prolonged detention, including hunger strikes. On Juneteenth—a holiday that celebrates the emancipation of enslaved people in the United States—protests reignited due to a lack of COVID-19 prevention measures. ICE has used force and solitary confinement in retaliation against protestors.

This behavior includes discrediting Cameroonians’ identification documents, disregarding evidence, pressuring them to give up on their cases, and claiming they will lose their cases and appeal before the judge hears the case.

Last week, advocates filed a complaint to ICE and the oversight agencies of Department of Homeland Security on behalf of eight of the Cameroonian asylum seekers. The men report that they were tortured and coerced into signing documents related to their deportations.

The complaint states ICE’s actions—including beating, pepper spraying, strangling, and breaking a person’s fingers—violate the Convention Against Torture as well as state and federal law.

Two of the men were removed from the deportation flight before it took off.

The group also included at least two women who had undergone gynecological procedures while detained at Irwin County Detention Center. A separate recent complaint alleged that similar procedures performed on other women detained at Irwin were unnecessary and without informed consent.

A key witness for sexual assault allegations at a different detention center was also recently deported while investigations were still ongoing.

Activists and Members of Congress Condemn the Deportations

In recent days more than 200 asylum seekers, most of them Cameroonians, were transferred from several states to Prairieland Detention Center near Dallas, Texas. ICE may have falsified travel documents needed for deportation by obtaining the signature of someone who had not been authorized by the Cameroonian Embassy.

Protestors attempted to block ICE charter buses transporting the immigrants from the detention center to the airport. In the hours before the plane was set to take off, Chairman Thompson of the House Homeland Security Committee and Chairwoman Bass of the Congressional Black Caucus demanded that ICE halt the deportations.

Representatives Omar, Richmond, and Castro expressed concern about the treatment of detained Cameroonians later that day. They also asked for transparency about their high rates of parole and asylum denial. Attorneys report that some of those denied relief had very strong claims to asylum.

The people who were deported could be in serious danger in their home countries.

The U.S. Senate recently passed a resolution acknowledging Cameroon’s armed conflict and human rights abuses, including arbitrary detention, torture, and extrajudicial killings. The State Department based its most recent country conditions report and travel advisory on similar facts. Most Cameroonian asylum seekers are Anglophones fleeing oppression by a Francophone government.

ICE should take all allegations of racism, abuse, and neglect very seriously. It is of utmost importance that potential witnesses remain in the United States at least until investigations are complete. Investigations should include thorough scrutiny of unequal treatment towards Black immigrants.

Detention and deportations are especially dangerous during the COVID-19 pandemic. ICE should end transfers in all but very few extenuating circumstances. The agency should also use its discretion to release people from immigration detention for the benefit of public health.