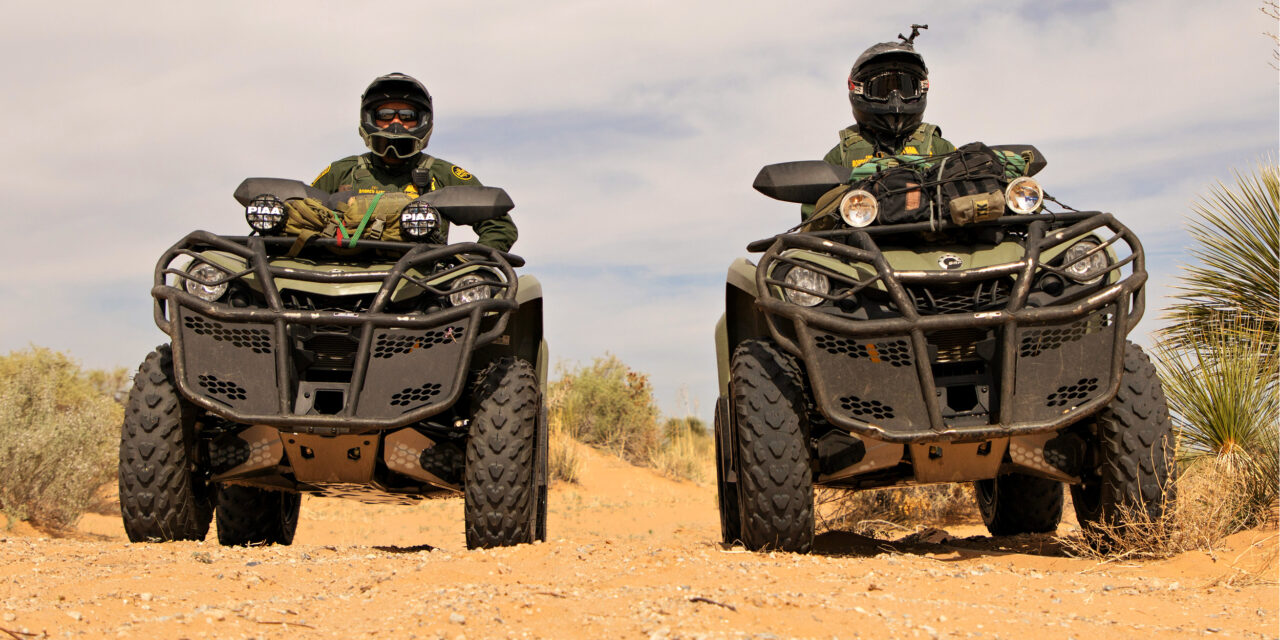 The camp—known as Byrd Camp—is run by No More Deaths (NMD), an organization that works to end the death and suffering of people crossing the U.S.-Mexico border. The raid follows a pattern of retaliation against humanitarian aid and criticism of the Border Patrol.

As the sun set, an armored vehicle, three ATVS, two helicopters, and at least 24 marked and unmarked vehicles descended on Byrd camp in over 100-degree weather. The camp has provided humanitarian aid in the Sonoran Desert near Arivaca, Arizona since 2004.

The raid included the Border Patrol Tactical Unit (BORTAC), the agency’s SWAT-style team. This is the same team that recently cracked down on protesters in American cities. Agents chased and arrested undocumented individuals who had been receiving medical care and other aid at the camp.

Unmasked agents shouted and pointed rifles at volunteers, whose hands had already been zip tied behind their backs. The agents cut open and ransacked tents, searched vehicles, and disconnected power from the well.

A warrant, which agents refused to show at the beginning of the raid, targeted documents and electronic devices. They confiscated camp medical documents and phones, preventing volunteers from documenting the event.  A Border Patrol cameraman, however, filmed the event.

The day before the raid, Border Patrol agents entered the camp without a warrant and detained one undocumented woman. From that time on, agents kept the camp surrounded. They required volunteers to pass through checkpoints to enter and exit.

This recent raid continues a history of retaliation against No More Deaths. In 2017, agents raided Byrd Camp, violating a written agreement from 2013 between the organization and the Tucson Sector Border Patrol for the first time. That agreement recognizes the camp as a medical facility as defined by the International Red Cross. Those facilities are off-limits for government interference.

In 2017 and 2018, the federal government brought charges against a total of nine NMD volunteers related to their humanitarian aid work. The only convictions (for entering a wildlife refuge without a permit and abandoning property (e.g., water and food)) have since been reversed.

Two days before the recent raid, NMD had released evidence related to the 2017 raid obtained through a Freedom of Information Act request. The documents showed that BORTAC had advised on the raid, and that a leader of the Border Patrol union pressured agents to proceed quickly without a warrant.

Greg Kuyendall, an attorney who represented Scott Warren, responded to the recent display of enforcement stating:

“…Humanitarian aid camps are recognized as a basic good and a thing that needs to be provided, normally by either NGOs or governments themselves, and they’re absolutely off-limits from law enforcement. That’s well-established in the International Red Cross guidelines, as well as the United Nations’ guidelines…Every organization that deals with refugees and people that are in crisis situations, whether they’re manmade or not, understands that humanitarian aid stations cannot be places where law enforcement is allowed to go hunting.”

There was no need for the Border Patrol to raid Byrd Camp, especially using paramilitary force during a pandemic. Such actions serve only to retaliate against human rights organizations and intimidate citizens from providing humanitarian aid. No More Deaths’ aid work should be decriminalized and protected.